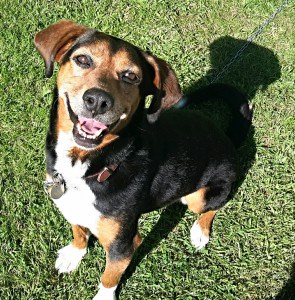 As it is National Pet Month I thought I would give an update on our animals. We have been back in Pembrokeshire for just over two years and our Turkish dogs are now Welsh dogs, thicker of coat and used to the doggy free for all of the beaches and fields where people are unlikely to heave a brick at them.

Shadow is now well into her middle years, her muzzle is greying, the white patch on her chest spreading and by the evening she is a little stiff but she still lopes with that glorious graceful stride and lies waiting for Nick with her front paws delicately crossed. She takes her role as Senior Dog and Pack Leader very seriously.

Emma, known as the Junior Rocket, remains flighty, pretty, of high dancing step, scared of rain, and impossibly stupid. She loves her routines; biscuits after walks, biscuits before bed, trips out in the car after breakfast and before nap time. 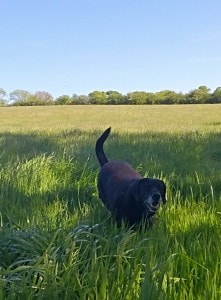 Shadow in the summer fields

Despite the extraordinary care and love they received from PAWS, the company that transported the two dogs and the late (and much missed) cat Mr Evils, all the way from Turkey to Wales Shadow was traumatised by the trip. She has attachment issues having been abandoned before and she was sure that Nick, the love of her life, had left her forever. She has barely left his side in the two years since she got here and our trips away have had to be carefully planned so she can stay in the house and there are familiar things and people around.

Emma, being the dippy thicky dog that she is suffered no trauma at all as a result of her long journey and actually didn’t notice she was back with us for a few hours! When she did notice her joy was boundless.

Nick, always keen to be seen as “best owner” still lies to the dogs, he gives them rich tea biscuits and tells them they are chocolate biscuits, he says the dogs like them better! He tucks them up at night. He chats to them whilst he mixes their feed, “ooh do you want McDonalds today” (McDonalds is tinned food, a fast food treat for dogs fed on home made food), “putting in some olive oil to make you shiny” Tails wag wag wag. “Little bit of milk for calcium” – Shadow barks, high pitched because she can’t keep the excitement in. Emma sits alert, her long curling tail sweeping smiles across the tiled floor. It’s a competition; Nick will make them love him best!

Our new addition, who came after we lost Mr Evils, is Terror, my Norwegian forest cat, and she firmly believes this house is hers. Now nearly two years old she is still a teenager in Wedgie (as they are known) terms, they don’t reach their full growth until four or five and their behaviour reflects this. Terror, also known as The Pterodactyl or just The Monster, is true to her breed, she likes to be carried like a baby but refuses to sit on laps, she is vocal in her demands for certain types of food, now, her throaty cries rising is volume at any delay. She like our company; when Nick works on his computers at the desk in the library she lies on the top of a nearby stack of boxes, sleeping soundly. As I work at the kitchen table she lies beside my laptop, snoozing in the warm air from the fan.

She likes high vantage points; lying at the edges of the gallery, paws over the edge, looking down on potential victims. Her racing attacks on all the dogs are legendary; a flat out tail fluffed streak, a rapid stop and a lightning fast flurry of boxes across the face that sets astonished canines back on their heels. No dogs will go upstairs in Terror is lying, tail twitching, at the top. Emma won’t go to bed is Terror is lurking, evil of eye, under the wardrobe. Shadow, from her position as Senior Dog, refuses to engage in play fights but if Terror is determined to snuggle up to her in front of the fire on a winter’s night then, with a sigh, Shadow will allow it.

The home menagerie is supplemented almost daily by India, my daughter’s chocolate Labrador. She was born just up the road and our house was her first home as she came to us as an eight week old puppy just after my husband died. Despite being first comer she is very much the follower in our small pack. Her amiable nature, secure from a life with an abundance of love, makes her less pushy than the others, apart from at feeding time when pure blood Labrador takes over and there is jostling for anything Emma, slight of appetite, leaves.

I can’t imagine a house without animals, every home needs some, and we never for one moment considered leaving our animals behind in Turkey when we came back to the UK. Owning animals doesn’t work that way and fortunately everyone involved in their export across Europe was super flexible as moving countries is never straightforward and schedules go awry.

I don’t know if Shadow and Emma prefer Wales – there is a distinct lack of sunbathing opportunities – but they have more freedom and less casual dangers to face. They go to beaches, they travel, they explore, they are met with pats and strokes wherever they go and they seem relaxed and we’re proud of how far they have come, our international animals.

When we moved from Turkey to the UK in 2014 we researched all sorts of options for transporting our animals. At the time we had two dogs and a cat that would be coming home with us. After looking at airlines, both where the animals were treated as luggage and specialist carriers who shipped them independent of us and reading loads of horror stories we settled on overland transport via an experienced private carrier PAWS a British run company operating out of Bulgaria.

Our animals were collected from Turkey the day before we left ourselves, they were taken to Bulgaria via Greece and there they stayed (in the lap of luxury, all together) until the company’s scheduled trip across Europe and onto the UK a few weeks later.

We collected our pets from just inside the Welsh border as they swung past on their way to deliver other animals throughout the UK. Everything went without a hitch and the dogs and the late Mr Evils were obviously well loved and cared for and we had received regular photographs and updates whilst they were in Bulgaria.

Below are links to the carrier we used and whom friends have since used to bring their much loved animals to the UK from Turkey. We highly recommend their service and they are well informed about any changes to legislation (happens frequently!) and highly experienced.