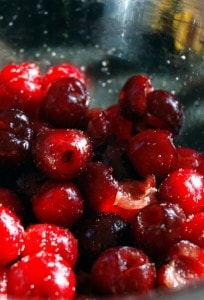 I haven’t done a recipe for ages, let’s do a recipe!

It’s not that I haven’t been cooking, I just haven’t been writing down what I have been cooking and Nick has been inhaling everything as soon as I make it – honestly you’d rather keep him for a week than a fortnight as my Gran used to say. We’re also really busy with guests and a big new building project (More coming soon on that!) which is taking loads of research as it is green as well as traditional.

The cherry season has just finished here in Kirazli and whilst the start of the picking was poor due to unseasonal rain that left the cherries soggy and short lived the tail end of the season produced a bumper crop and we were up to our eyeballs in cherries again. Having done the usual cherry cake, cherry clafoutis, cherry pie and forced kilos of fresh cherries on our guests I decided to try something new and combined a couple of recipes and a cooking method I saw on Australian Masterchef (much love to new season of the show!) to make this baked cherry and almond cheesecake. It’s really rich, it’s really lovely and although it’s a bit fiddly in the cooking process it isn’t exactly arduous and people love it.

Base
150 grams plain biscuits (I used the Suisse tea biscuits you get everywhere here and are really crispy but any plain light biscuit will do)
50 grams walnuts,
2 tablespoons honey
100 grams melted butter.

You know the drill, therapeutically smash walnuts and biscuits with rolling pin to make a crumb. Melt the honey and the butter together. Mix in the crumb and press into spring form tin. I press it down hard and then polish the top with the back of a spoon (just like we float concrete!) to make it stronger and less likely to get soggy.

Cheescake mix
2 x 300g packs full-fat soft cheese
200 grams sugar
2 tbsp plain flour
2 tbsp ground almonds
1 tsp almond extract
3 large eggs
100ml natural yoghurt
100grams curd cheese, ricotta if you have it or block lor if you are in Turkey.
400 grams pitted fresh cherries which have been mascerated in brown sugar and almond essence for an hour or so
Handful of almonds flakes (or lumps if I’ve sliced them!)

Whisk the cream cheese until it is soft, add the sugar and almond essence, whisk in the eggs one by one then add the flour and ground almonds and finally the yoghurt and curd cheese.
Pour cherries on top of the biscuit base, pour cake batter on top. 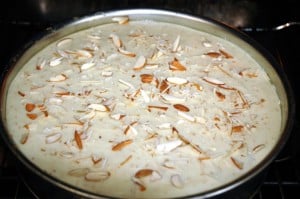 What we’re aiming for is a creamy, rich cheesecake that shrinks away from the sides of the tin and holds its shape yet is still luscious in the middle, hence this weird cooking strategy which stops the cake from cracking on the top and being overcooked. It feels like not enough cooking but honestly it works.
Given the temperatures we have here at the moment I could probably have cooked this just by covering it with clingfilm and putting it by the side of the poll but here’s the oven method.

First cook the cheesecake for ten minutes at 200c, then reduce the oven temperature to 110c and scatter almond flakes over the top and cook for a further 40 minutes. Turn off the oven and leave the cheesecake inside with the door closed for one hour then leave it for a further hour with the oven door wedged open with a spoon. Remove from the oven and allow to cool at room temperature for an hour before putting in the fridge overnight. 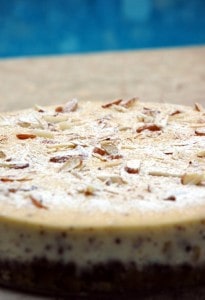 I have been known to skip the overnight fridge step as Nick and some of our guests prefer the cheesecake with the centre still warm enough to melt the bucket of cream you pour over it!

The other week we were visited by Ian Parmentier, Australian celebrity cook who presented Consuming Passions, he was interviewing us for a piece he was doing for Selector Magazine about his food and wine travels in Turkey. We found we shared the same attitudes to food, we’re passionate about it, we really love feeding people but also there is a moral and intellectual side to it all; we hate waste and we understand that working with seasonal foods whilst brilliant is sometimes hard and you have to try harder to make the most of what you are given, just like our Turkish neighbours do.

There are times when I think I just can’t face another cherry and when Ahmet, bless his generous heart, turns up not with a bowl but a bucket full cherries I think “What the hell am I going to make now?” But you think of things, because to waste is to deny the year of work that went into nurturing them and coming up with something new to give to the people around you is like making Christmas every day.

Worlds apart, hemispheres apart, people who are passionate about food share the same attitude, we cook because we love the ingredients and we love to feed people which is why we’ll spend four hours fiddling with a cheesecake 🙂