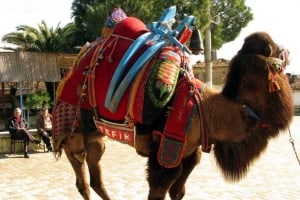 “I don’t really want to go.” said Nick when Mehmet, the neighbours son turned up at the door one evening last week to collect him. “I don’t get it and it’s too cold to strip down to my shorts.”

“Just go and watch” I told him, “It’s part of village life, you have to join in, I helped butcher the neighbours goat last Bayram and you have to go to Camel Training. It’s a sport, its healthy, its like cricket, I don’t get that either but you English seem to like it!”

Mutinously he went and Mehmet was of course chuffed to bits that Nick was joining in because this is his last spring before joining the army and his last chance to impress the village girls with his physicality and every moment he isn’t wrapping rope light around his battered scooter he is down in the square by the Muhtars office practicing his camel wrestling moves to jeers and catcalls from the tea shop crowd.

The ancient sport of camel wrestling is still popular here in Turkey, all winter the brightly caparisoned camels’ process proudly through the towns and villages of the Aegean before gathering at the wrestling field where happy crowds snack on camel sausages and watch the camels slobber and heave at each other.

The camel wrestling we see today is a very much watered down version of an eons old sport but Kirazli is one of the few villages that keeps to the ancient ways and here, every spring, on the first day of April, the village stages true camel wrestling, a searing spectacle of mud, flying camel dribble and half naked men doused in olive oil so the kicks slide off, because in Kirazli, in accordance with the ancient lores, it is Man -versus- Camel.

Akin to the Bull Leapers of ancient Minoan Crete the Camel Wrestlers of Kirazli are acrobats and strong men, men capable of facing down the evil eyes of the camel and vaulting and somersaulting over and around it before wrangling the fearsome beast into submission. 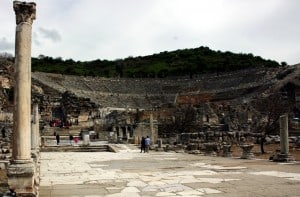 Once performed at the great theatre in Ephesus, camel wrestling was a crowd pleaser and the men who pitted themselves against the camels were greatly admired – The philosopher Heraclitus of Ephesus, regarded the manly art of camel wrestling as essential to the development of sound citizens, as he said when watching the men at their arduous training “Good character is not formed in a week or a month. It is created little by little, day by day. Protracted and patient effort is needed to develop good character. Camel wrestling epitomises this.”*

Camel wrestling isn’t something you just take up, you kind of need to work your way up to it, most young men start with cat wrestling before moving on to sheep and goat wrestling before they take on the camels. Some never progress beyond goat. Only the bravest graduate to camels and have their day of glory on the spring fields of the valley.

A good camel wrestler is set up for life, Tunc, our village entrepreneur, was a big man in camels when he was younger and since then everything he has touched has turned to gold, the fencing company, the dolmus, the village shops. He is a hugely successful man all thanks to the reputation he gained on the camel wrestling field. Men at the tea shop still get misty eyed over the time he performed a double somersault in pike position right over the head of a bull camel and then brought it to its knees with a back flip in to grasp the tail and precision application of both feet to the rear of the beast. They say he smiled the whole time and a whole generation of village women fought each other for his attention afterwards.

“How was it?” I asked Nick when he returned a few hours later muddy and grinning.

“Actually it was mental but brilliant” he said, “Those camels are massive and they stink! But if I was a few years younger I could really get into it.”

“Just stick to impressing the village ladies with your window cleaning skills.” I advised him, “I don’t think our insurance covers us for camel inflicted injuries.”

It took me three washes to get the olive oil out of his shorts and he smelt like a well dressed salad for days but at least it masked the smell of camel.

We’re off down to the camel wrestling ground this morning to watch Mehmet and the boys pit themselves against these great beasts, it will, as always, be one helluva sight and will be followed by the traditional tortoise roundup this afternoon (you can read about the tortoise roundup here – The Tortoises of April ) These are busy but fun days in Kirazli.