I was reading one of my favourite blogs last night (Moving On – Chronicles of a family moving from England to Spain) about a lady who is house hunting in Spain and is now trying to decide between an old property and a new build. She really wants a home with loads of character and so the new build is off putting to her as despite being a blank canvas for family life compared to the solid beams, quirky corners and faded splendour of the old house it looks boxy and unfriendly. It is a tough choice for a busy working family as it takes lots of work to add character to a house.

Reading the blog brought back memories of how hard we worked to build character into this house, and how I still work at it.

I have a nice house, bits of it look like a magazine spread – the bits the cat isn’t lying on or the bits Nick hasn’t covered with computer innards! – and my friends laugh at me because my beds all have layers of throws and cushions and my curtains are over long and form puddles of fabric on the wooden floors (If Phil ever wanted to annoy me he would go and kick a curtain because he knew it drove me nuts). They don’t notice the built in age and the effort we went to to add character and texture to the fabric of the building – but then they aren’t supposed to, it is meant to look effortless.

Turkish houses are not known for their character, in fact getting a character property here is nearly impossible and if you are experienced enough to try and build one yourself you need to commit at least a year on site to it and be prepared to work hard to find the materials because materials and men who do what they are told are the hardest part. The money is actually the easy bit 🙂

Each year that passes this house ages as it was meant to; the exterior wood fades and is nourished with teak oil, the interior wood gets another few hundred layers of lavender polish, the roof tiles grow lichen, the colours mute and soften and the planters in the garden mature with water stains and moss. The studio bothers me though, and now Spring is in the air it’s time to do something about it. 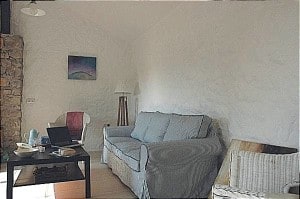 The studio as it was - too much white

You have to have a project and little projects keep a home evolving and changing and so the studio is going to get a little more age. I fancy a little Tuscan sunshine in there. It is a big space and originally I saw it as a potential gallery or art studio so it has a lot of very white wall space and whilst the high cathedral ceilings and white walls make it very cool in summer in winter and spring the light is colder and less welcoming.

These days it is a popular holiday rental and I would like to give it a cosier feel and add an aged warmth to it before the season starts and so I’m going Italian and trying to recreate the decades of age of Italian plaster in a few weeks! 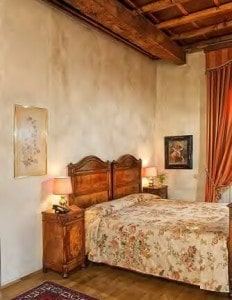 The aged and uneven effect I am looking for

Interior decorators can fake up polished plaster finishes like Marmorino and Venetians stucco using resin and plaster but I don’t have those materials available to me and I want something softer and so I have to play around with what I know and what I have. I’m aiming for the dusty matt look of Intonachino and if I had lime putty I could make a pretty reasonable version of my own but Turkey hasn’t yet rediscovered the benefits of using lime in this way, or at least not here. They use a lot of slaked lime in cement as a plasticizer and they paint walls with a lime wash called Kirec but they don’t use aged lime like we do in the UK on restoration projects where you can order it online and have it delivered in tubs or massive canvas bags to your project. As I don’t have a spare six months to make my own lime putty I’ll have to wing it as usual.

The studio is a very big space and so I really need to do two things first – one I need to be sure about the colour, and two I need to age up the walls a bit.

The flick finish cement render over the stone walls is already nicely uneven and roughly textured with bits of mica and quartz from the course sand used in the mix. It follows the contours of the underlying stone, but I want it to look older, more layered and so half an hour with a hammer and we’re back to bare stone in patches and sanding the rough edges will make it look as though it has worn down over time. 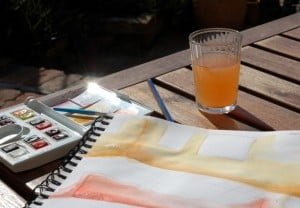 A couple of watercolour tests

The colour is the toughest bit for me because I am not naturally drawn to strong colours on walls and if I want a Tuscan look I have to built it up with oil based paints and layers and layers of home made glazes worked in over the top.

It’s either going to be red based or yellow based and after doing a few rough watercolour sketches I’m thinking more likely yellow, it will glow in the afternoon light that floods the studio and it will work with the paintings and wall hangings I have in there already without being too in your face.

Tomorrow I’m off to Selcuk to interrogate a few yapi markets, I need a good oil based paint for the base coat. Fortunately I have my own pigments including yellow and brown and oils for the glazes to go over the top so that should make life easier.

Once I get the base coat I can then do some proper full size test boards before I commit to working on the wall itself.

I’ll keep you posted on progress.

And yes Mum, I did take a hammer to a perfectly good wall! 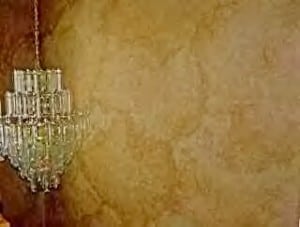