Mr Evils on a normal day

A couple of weeks ago Evil’s wandered into the house announcing his royal arrival by yelling his head off as usual, suddenly he stopped, went cross eyed trying to look at his own nose, yowled mournfully, coughed a couple of times and then threw up a hair ball roughly the same size and shape as Madagascar.

Now despite his swaggering insouciance, faultless arrogance and high self esteem, or possibly because of these, this hairball incident horrified him. Evil’s is a young cat and he had never been sick before. The process obviously signified deep and desperate illness to his nasty little brain and he took to his cushion in front of the fire presuming the end was nigh.

He barely moved all day, just lay there, probably composing his epitaph and occasionally scanning a verse from Dylan Thomas as I had left Miscellany 1 on the floor (that was cruel!) – Rage rage against the dying of the light… 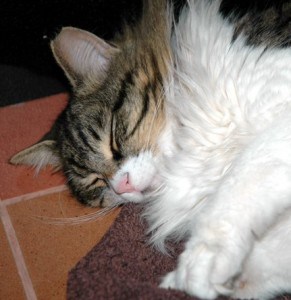 Evils sure than the end is nigh

By evening even I was worried about his lethargy. I checked him over, pressing his fat furry tummy to see if he had any blockages or pain, checking his eyes, ears and nose. He was a little pale but his saliva wasn’t sticky (oh having pets is fun!), he didn’t have diarrhoea (thank you spell checker!), no mucus, no sneezing, no obvious pain. He is wormed regularly, is inoculated up to his glittering eyeballs and has no fleas. So we ruled out respiratory tract infections, bladder infections, further hairballs and due to the time scales, poisoning.

But he wouldn’t eat and he wouldn’t drink and he wasn’t grooming himself. He just lay there, looking desperately weak and pathetic and possibly whispering “Stop all the clocks….”

He just didn’t have enough symptoms for an emergency call out of the vet but he definitely wasn’t right and he gave every appearance of sinking fast, “with his face to the wall, as the manner is of the poor peasant in his stone croft on the Welsh hills”……he’s got me quoting doleful poetry now!

Cats are weird, sometimes they get ill for no obvious reason and given his strange personality Evils may well be prepared to drop dead just to prove a point.

Nick was sent down to the ever open village shop with a politely worded but not wildly optimistic note asking for an empty syringe as the only other syringe in the house contained araldite!

Tunc, the massive and meaty shop owner, consulted the note with due care and then yelled for Yacob, his assistant, who emerged from the dark recesses at the back of the shop where he had been teasing his Elvis quiff to even greater gravity defying heights behind the biscuit rack. More consultation and then Yacob was worming like a ferret through the more inaccessible corners of the shop, emerging in short order with a dusty box full of surgically sealed hypodermic syringes. Impressed…oh yes! Is there anything this shop doesn’t stock?

Armed with a couple of empty syringes, some boiled water and sugar it was now time to hydrate Mr Evils.

Despite being the equivalent of Hannibal Lector in a fur coat Evil’s isn’t stupid enough to bite the hand that feeds him and so he will endure the kind of handling that has lesser cats going into Tasmanian Devil mode. He sat on Nick’s lap whilst I gently squirted boiled water into the side of his mouth. Hydrating a cat requires .5ml per kilo of body weight and I got about 4ml down him before he got fed up and started complaining.

It did perk him up a bit, and he managed to limp (on all four legs) over to his litter box and had a wee to much applause. He then returned to lying listlessly in front of the fire.

Come morning Evils still displayed no symptoms other than being miserable and cocking up his nose at food. He had used his litter box again in the night but hadn’t come upstairs to sleep on the bed like he normally does. Either he had something viral which wasn’t producing dramatic symptoms or he had really frightened himself with the hairball incident. Either way he needed some nourishment and being a somewhat sturdy cat he runs the risk of fatty liver syndrome if he goes without food for a couple of days and that can kill him.

Time for syringe number 2! I mashed up some cooked chicken livers with their stock and strained them and then sucked the liquid into the syringe. With the first tiny squirt of chicken liver into the side of his mouth Evils decided he was too young to die. Licking his lips frantically at the familiar taste of his favourite food he let me give him the whole syringe. 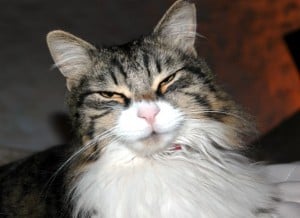 On the road to recovery and holding me responsible

Within an hour he was perking up and was grooming himself, within two hours he wanted more livers, by mid afternoon he was lying on his back purring and looking around for something to molest. Mr Evils was on the road to recovery.

He stayed inside for the remainder of the day and took it easy all the following day but by the third day he was back up on the roof stalking a stupid quail that had flown up there and eyeballing the sparrows.

Yesterday he brought me a rat; well most of a rat, the head was missing, he’s probably got it on a little stick somewhere, so he is now fully recovered. I don’t know what upset him; maybe it was a really mild upper respiratory infection and he couldn’t smell food and so wouldn’t eat it but more than likely I think he just shocked himself with producing the hairball.

I consider I saved his life, he thinks it was all my fault in the first place and I should have cured him quicker. Like my husband used to say, feed a dog and it thinks you’re God, feed a cat and it thinks it’s God!