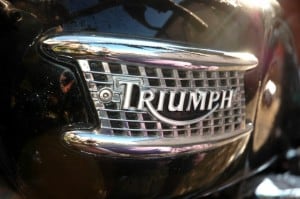 You know the classic Bat out of Hell album cover, beautifully designed by Richard Corben (geek alert sounds), where the motorbike bursts out of the ground with some long haired (yuck) Adonis astride it? Yes? Well, in my experience, said Adonis will have spent two weeks prior to bursting out of the ground cleaning his bike, admiring it, contemplating chromey extras available at vast expense via international shipping and he will spend the month following bursting out of the ground again cleaning said bike, making minor adjustments to chains and generally coddling the machine as you would a new born baby. It’s just not rock and roll any more.

Nick likes bikes, preferably old bikes, with a kind of sturdy British cool about them that means they spend more time under cover than on the road. He likes building them, admiring them and above all cleaning them. He enjoys riding them when no rain is forecast so they won’t get muddy, and his knees won’t get cold (your Gran did warn you!). Which would make Turkey, on the face of it, an ideal bike world, but it isn’t, because any vehicle here costs a fortune and the kind of bikes Nick likes are rarer than a virgin goat and cost the equivalent of several kidneys and trying to import one would get you embroiled in Turkey’s most famous shaggy dog story.

Nick started looking for a bike to own here about ten minutes after he landed in the country on his mission of mercy three and a half years ago. It has taken him this long to find a bike he wants from a buyer he can work with. Sometimes, with Nick, I think the search is the fun bit.

Motorbikes, like cars, are expensive, and baring the odd anomaly (apparently a Motor Guzzi Grizzo is now cheaper here than in Italy, but that’s the Italian economy for you!), you will be shelling out a lot of money for a big bike. Anything over 250cc goes into a different tax bracket and the price goes bonkers and so big bikes are the reserve of real enthusiasts and the choice is limited.

There are a fair few Harley’s about but most of them are Chinese in heavy disguise and you won’t know their real parentage until you examine the rhusat. I saw a couple the other day slowing sinking on their flattening tyres in a grubby workshop in town, parked next to a vile Yamaha Dragstar that looked like Judge Dread had left it there when he upgraded to something less obvious and there are numerous BMW’s but most have been hammered and these don’t really work for Nick.

Nick needed a bike he knew well, that he could work on himself without too much intervention from garages here. We know a good bike guy downtown but most places just aren’t used to working on the big machines so if they have the knowledge they don’t have the kit and parts are an outrageous price. So he needed something familiar which if necessary he could strip himself and he had sources outside of Turkey for parts.

Note – Nick expects to rebuild his bikes and spend many, many grubby hours tinkering with them, because they are normally old, and he is a perfectionist and the slightest changes must be restored to original. Nick aims to create future museum pieces; he spent his formative years in the polished metal glowing, museum like environs of a Swiss Count’s multi million dollar collection of classic cars, so in his mind, all bikes and cars, should be run carefully in optimum weather conditions but mainly maintained in pristine condition so generations of geeks yet to come may admire them. I know this is how he thinks, he looks at a bike and says “That badge is wrong, it should be the 1964 badge” and “The tank isn’t original, it’s a copy.” He never once says “that’s perfect” because the odds of that happening are astronomical.

So the search for a bike was always going to be long and (for me) tedious. Nick was buying the owner as much as he was buying the bike and after a while there were several on the short list he built via long hours on Sahibinden. All the owners were people keen to talk about their bikes, to share the history and when necessary cough up the VIN number so he could trace it’s journey to the here and now. 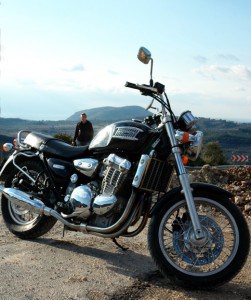 Eventually the choice came down to a Triumph in Mersin and a Triumph in Istanbul and the negotiations got serious, not about money, but about legality. We buy through our company so there is no messing around with changing the registration plates but we still need to examine the rhusat, trace the ownership and check for debts. You don’t really want to schlep to the other end of the country only to run into problems at the last minute so you need to be clear that all the paperwork is in order. Before he ever got on the plane to Mersin Nick knew the Triumph’s birthday, where it had been sold in Germany and when it had been imported into Turkey.

You also need to be sure that you have identified, as much as possible, everything that needs changing or repairing so you can source the replacement part and that involves lots of photographs and lots of research with owners clubs worldwide. Spare parts for the big bikes are expensive here and even normal wear and tear parts come at a price that makes you feel faintly sick, for example a ZR rated front tyre for Nick’s Triumph is 350Euros from Istanbul but he had one shipped from the UK for £70.

Everything went smoothly in Mersin when Nick went down to view the bike, he did the business in a day, flew down on the morning flight from Izmir, test drove the bike, did the business with the notary in the afternoon and flew back on the early evening flight. The bike was shipped up in a metal crate and arrived in Aydin five days later where the men of the village happily accompanied Nick to cut it from it’s crate and admire it.

Tips for buying a vehicle privately in Turkey:

1. Everything is for sale all the time, but buying it might be tricky. If you are dealing direct with owners, which will probably yield the best results in the end, expect it to take time. Many people don’t reply to online messages via their adverts on Sahibinden, often because they don’t own a computer or they just got a mate to put the advert up. Expect a lot of non-response to email messages. Ringing the number on the advert is generally quicker.

2. Google translate, don’t rely on it – If you don’t have enough of a grasp of Turkish to make an enquiry by phone you will really need to be dealing with someone who speaks English. So keep your initial enquiry message to the simple question – Do you speak English? Sending long enquiries composed via Google translate will normally make you sound like a nutter. It’s okay for getting the gist of something sent to you and sort of okay for very very simple first person sentences but that’s the best you can hope for from it.

3. Be prepared to travel – buying a bike elsewhere in the country isn’t a big deal provided you have done your homework first; you go, you look at the bike, you like the bike, you go to the notary and you buy the bike. Before you go you check if the person you are dealing with actually owns the bike and scans of the registration document and the owners kimlik will confirm this and with the information on the rhusat you can now check outstanding debts, tax or otherwise, online via the Turkish government websites.

4. Don’t get arsy, just leave – if when you finally go to view a bike, or any vehicle, and it turns out to be nothing like you were told and bears as much resemblance to it’s photos as I do to the front cover of Vogue don’t get arsy and stressed, just walk away. It happens here, we live with it, it’s normally not malicious, it’s just wishful thinking, the curse of this country and we put it down to experience and try and laugh about it. That’s why it is generally best to keep a certain distance between you and the buyer no matter how friendly they are. Nick was on good terms with the guy he bought the Triumph from by the time he got to Mersin to see the bike, but he turned down all offers of accommodation and transport so he didn’t feel obligated if he didn’t like the bike. He also arranged his own translator remotely and knew which Notar he would use before he got into town as all the information on the Notars and the official translators in available online.

5. Close the loop – you liked the vehicle, you paid for the vehicle, you did the notary thing and the bike and a small receipt are now in your happy hands. Make sure you close the loop on the purchase and get the vehicle registered in your name. You have thirty days from the day of purchase to do this or you face nasty fines which will cheerfully accumulate over time. Because we buy through the company it is a lot easier for us and Nick’s new rhusat for the bike was duly issued by the central police in Mersin and arrived by registered post in Kusadasi three weeks later – he paid 5tl for the postal service.

This winter it has been far too cold to ride the bike and so it is currently living in Kusadasi Saniye in the garage of fellow Triumph fanatic Selkar who is an excellent mechanic in his own right and Nick visit’s it every few days and enjoys pigeon Turkish bikey chats with kindred spirits.

When he isn’t talking bikes downtown with Selkar Nick is sourcing parts for the bike and parts for his new friend’s bikes, Triumph World in Chesterfield are now on the speed dial on the phone and Daniel Moore there bends over backwards to get Nick the small and shiney parts he needs and has them shipped here, the latest shipment took only five days to cross the continent.

Small and large packages are arriving routinely at the village tea shop and Nick is happily unwrapping bolts and screws and indicators that will restore the bike to “original”. Yesterday the owners handbook arrived and he actually kissed it!

At some point he may ride it.

Own an income generating home in Kirazli Village. Click Here for details of our traditional stone house in Turkey for sale.