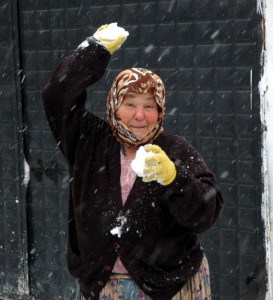 This is my seventh winter in Turkey and it is the worst I remember. The old ladies in the village say it is the worst in living memory – and then sneak up on you with a snowball.

When the electric storms aren’t having tantrums over the mountains the torrential rain is sluicing through the streets making surfing down to the tea shop a real possibility and when the rain stops and the skies clear the temperature plummets and the village is glossed with ice and frost for days at a time.

My pool froze, four times. My bougainvillea has expired, my geraniums have blackened and died and when the dog’s water bowl outside froze solid Evil’s got stuck to it – curiosity got the cat a very cold bum. It is, in short, bloody awful and not what we are used to enduring anymore, despite good solid Celtic bone structure and insulating fat deposits we’re really feeling it. 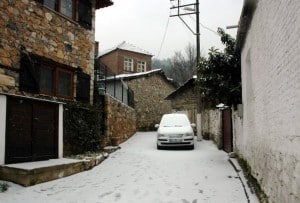 We’re down to one access road into the village; the new road from Yaylakoy has disintegrated under tractor and truck traffic and is mainly deep furrows carved into the clay and the gorge road up from Kusadasi is officially closed for widening and improvements and has been shut for a month now. The dolmus traffic is taking long and confused routes through Gokcealan and Cinar and that road is suffering from the increased traffic and the torrential rains. 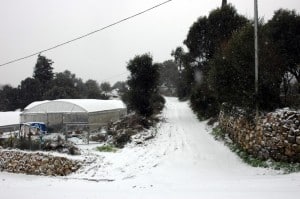 All the winter jobs are on hold because there just isn’t enough of a window between storms to get them done and the dogs are hogging every heating source possible.

I sneakily buggered off to the UK and warmed up nicely in the St David’s Hotel and Spa in Cardiff Bay and so missed ten days of really foul weather but Nick kindly sent me minute by minute whinges about how cold he was. As I watched a blood red sun rise over the Roath Basin and the National Assembly building he sent me pictures of the village streets raging with snowball wars and our usual walks cloaked in white. I was sorry to have missed it but I consoled myself with a massage and an hour in the sauna 🙂

When I landed back at Izmir last Monday night in the middle of an epic thunder storm it took us twice as long to get home as it normally does because the road through Torbali was feet deep in water and the power was out as far as Selcuk.

Talking to our friend Hakan the other day he said this is the wettest and coldest winter he remembers and he has burnt twice as much fuel as usual to keep the house warm. I dread to think what sort of damage some of the summer house owners will be facing when the spring comes and they open up their houses.

But there is hope on the horizon, Ahmet down the tea shop promises summer in a month, and he is probably right, this winter is vicious and feels bad to us but it is nearly done and by the end of February the sun will be shining again. It’s shining today actually, and my washing dried in three hours and the days are noticeably longer and soon the ice and the snow will be a distant memory. 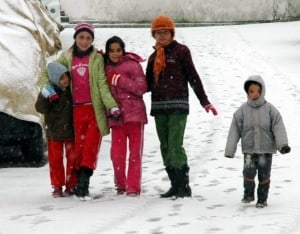 The first snow these village children have ever seen

It gives the neighbours something to talk about though, everyone will remember the winter of 2012 when it snowed in Kirazli and the old ladies of the village ganged up against the children and snowballed them into the ground.

PS Thanks to Nick for the photos, fortunately I left my camera at home because it’s huge and not easy to haul around and so he managed a few good pictures before the villagers caught up with him and tried to bury him in the snow.