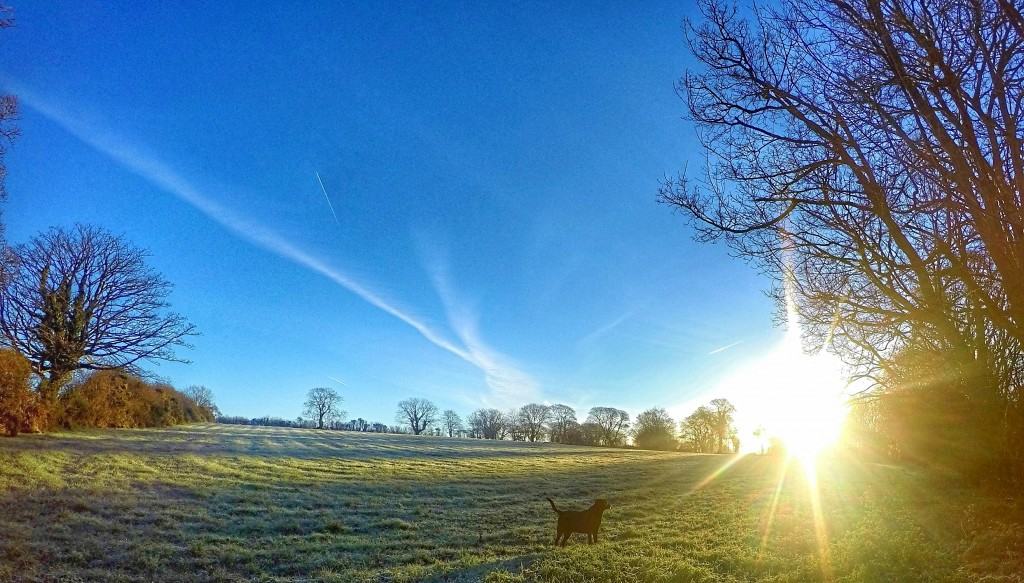 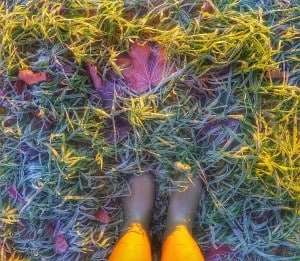 These frosty November mornings are wonderful, the dogs are excited by the spring step cold crunch of the grass and our woods are full of ice cauled leaves that chime as they fall. On the old drovers’ road beside the house the leaf litter is deep for kicking and underneath the iron hard ground is pitted with fox track, badger tread and the scratches of squirrels. The dogs are in scent heaven when my daughter and I take them for their morning walk down to our woods.

My woods are a sharp triangle of folklore and myth caught between old walls and guarded by a grey menhir with a hole through it. This patch of land came with the old slate works we built the house on. A little leftover from an old title deed so we thought at the time. A crumpled corner of a piece of field cut away when the railway came through. But it isn’t. It was always thus, so it seems. On the old maps, from the time before the railway came, before they threw iron across the land, it was there. Complete and of itself. Alongside the drovers’ road. And I wonder, when I look at it, what was it? Why was it?

An oak tree in its midst, a writhe of old trees on its edges, a gateway now a gap, a trenched corner with raised platform under a tripping tangle of briars, hiding its truth. 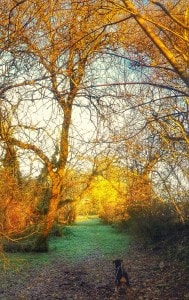 Every now and then we clear a section of blackthorn scrub to create sunlight clearings and we ponder it. Was there a smithy here? Was this a waypoint for the drovers’? The first stop after the slow first day on the road, with the cattle still lowing for their home fields whilst the leather booted pigs grunt in the grass.

I stand in the drovers’ road, looking down its clear straight avenue and beside me my patch of land hides its secrets and whispers to the old tales, the old worlds, before iron ruled the world.

I think I hear the ring of a smithy in the morning air, all bell like chime. Did they shoe the cattle here; meld the half-moon cws to their cloven hooves before they took the wider, harder road to the east, to the markets in the towns?

The Drover’s Roads of Pembrokeshire

Our drovers’ road is a remnant of an ancient network. Until the railways came in the late 19th century the drovers’ roads were active arteries, herding the cattle, sheep, geese and turkeys to markets in the major cities and as a sideline dealing in news, carrying money from relative to relative, ferrying legal documents and generally ensuring commerce on a large scale functioned across the land.

Cattle in their droves were shod with half-moon iron shoes to protect their hooves on the long journey whilst pigs on the move wore leather boots, and geese had their feet tarred to endure the miles.

The legendary Welsh Black cattle – the black gold from the Welsh hills – who have roamed this countryside since pre-Roman times, were a valuable part of the drovers’ trading and such an integral part of the Welsh economy that in 1799 one drover, David Jones, founded what came to be known as the Welsh Black Ox Bank. The Welsh Black Ox bank was bought up by Lloyds and the black horse that gallops across their advert replaced the Welsh Black Bull that the bank originally had on their notes. Maybe they should have kept the bull!

Where the old roads run 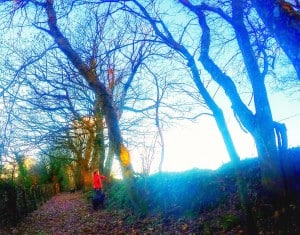 Our roads are old; the drovers followed the routes the romans cut and they followed the ways our Neolithic ancestors used, all the desire ways across the land. Our myths and legends are woven into the roads, old heroes pass on by. Arthur and his round table, questing for love or glory, women of flowers drifting in the summer green and queens on white horses, slipping between worlds in the search for a suitable king. In these short days after Samhein, when the low winter sun speeds the day and the nights are long and fearsome cold the legends come out to play on the old roads.

Down in the woods my dogs go hunting through the litter fall, every now and then they pause, freeze, scent the air for something I can’t sense. They are always alert here. Quivering with pause before the chase. Sensing a hunt going on just the other side of the now.

On winter nights when I take them out for their last walk they bark at nothing and in the clear cold sky Orion hunts the heavens and in the lane the ghosts of the drover’s sly clever dogs slink home alone and in the thinness of the icy night the Wild Hunt waits, maybe.