I have loads to write this week but I have complete brain freeze at the moment!  I am trying to write an article on Zen and the Art of Building in Turkey but I keep getting distracted by actually building in Turkey and the truly Zen like battle of design and science (I just had to learn too much about window construction).

So here are the highlights since I last posted and a few pics whilst I try and get over writers block.

On my last post we were heading for a day out in Izmir.  Forum Bornova proved to have some excellent shops and I had to be dragged screaming from Zara home as I wanted to buy the entire contents.

Selcuk market on Saturday was swarming with happy shoppers and the first of the early tourists, causing us fellow Brits much shame by strolling through the grounds of the mosque in skimpy clothes!  Ayip! Cok Ayip! 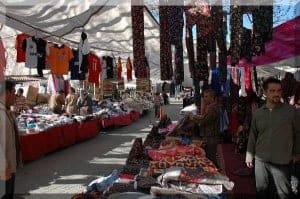 Phil had his birthday here on Sunday and was nearly reduced to tears by both Sezai and Metin buying him presents.  Metin searched high and low for a military style jacket similar to his own that Phil had admired and Sezai bought socks and a bandana that he could ill afford.  Phil was close to losing his British reserve!  Our neighbour then cantered up the lane on his horse and invited us to share a bbq as the weather was hot, they were celebrating a birthday too and it was time to get the grill out. 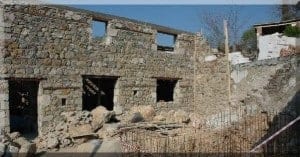 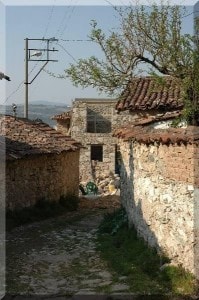 I am making final choices for the bathrooms and cannot decide if I want to use the Vitra Dream bath that I used in bedroom Clio when we designed and built The Muses House, or the new larger, Vitra Elara which at 2 metres long and 1.10 metres wide is even more luxurious.  Either way its got to come from Istanbul so I better make my mind up soon.

I found wonderful porcelain tiles for the kitchen floor but the windowsills are proving difficult as I wanted to use handmade bricks but think I may have to go for marble in the end.  Its still up in the air.

Just this week Phil found a lovely stone that had been built into the wall above the kitchen door.  It has fossil shells in it and when they found it the stoneworkers positioned it to show up, which is very nice of them.  They like doing things like that, there is a lovely little piece of roman column built into the wall by the stairs to the studio, perfectly fluted and cunningly placed. 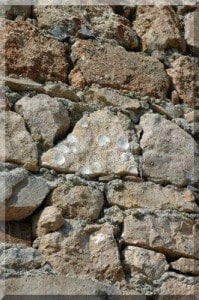 I want to say hello to all our lovely new friends, internet and real life, who have made the last few weeks such fun – so Alan and Brenda, Ian and Geraldine and family and Nicolette – Hello, and it is lovely to have met you, as one gets older one appreciates new friends so much.

Got to go, off to Soke and Selcuk now to discuss the design of the roof trusses.  So it will be out with the sketchbook and long involved translations as we try and convey King Beams and Queens Beams to baffled sawmill owners.  All very Zen….feeling your way forward through science and design.
posted 20-03-2007