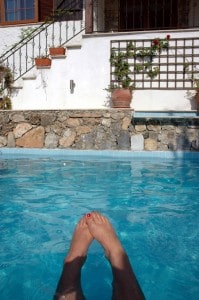 This is the most of me that will ever be photographed in a bikini!

The Heat was a long time coming this year, not the sun, that’s always around, but The Heat, that deserving of capitalisation, smothering, iron hot, oven blast, knife edged heat that settles over Turkey in the Summer. Normally it arrives in June, this year it was late, but now it’s here and everyone is talking about it.

“Cok sicak!” exclaims my neighbour as I scratch the head of her most affectionate goat whilst Nick sharpens her kitchen knives with the grinder and drips sweat on the blade at 8am. Today will be 43 degrees she says and, shock, horror, tomorrow will be 45.

“Cok sicak!” laughs Ahmet as he sips his morning tea in the shade of the fig tree in his farm yard as Shadow, ever on the scrounge, lolls in the thick dust at his feet begging for bread.

“Cok Sicak!” puffs Sahin to Nick from the shelter of his shady gazebo in his flourishing Rousseau like hobby farm amidst the vineyards.

“Cok Sicak!” says Yacob at the village shop as he presses his Mother’s thick suzme yoghurt on us, lovely and cooling and so versatile on a summer menu.

Every year The Heat arrives and everyone is shocked and surprised and often horrified by its arrival. As if it was something unusual. As if it hadn’t happened every year for the last few eons. It’s almost British, this weather obsession and constant surprise by perfectly normal meteorological conditions.

Turkey has a very piecemeal approach to adapting to the seasons. Here in the village my neighbours do adapt and sleep in the courtyard in summer and cook early in the morning so they aren’t toiling over an open fire in 40+ degrees (oh the delicious scent of frying aubergine fritters this morning, wafting around the village) but down in town the shops don’t open any earlier in summer and that great Mediterranean tradition, the official siesta, has never been adopted here. Whilst three miles away across the water the residents of Samos shut up shop and head en masse for the shade come lunchtime here in Turkey they keep on going through the heat of the day.

Some towns, like Guzelcamli, adopt a night market which makes absolute sense, but Selcuk doesn’t and the market there doesn’t get going until after 9am whereas in Spain I would have been to the market and be back home in the shade by that time.

Doing anything in The Heat requires planning; trips out and routine errands are planned according to the shortest amount of exposure to the middle of the day and direct sunlight. We only wear sarongs and swimming costumes in the house with a loose shirt to hand for modesty and manners if someone calls. 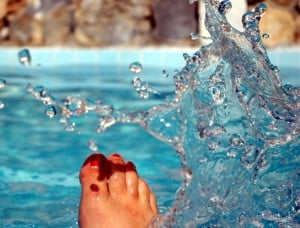 If we don’t have to go out we don’t go out, if we have to go we wear the lightest linen and cotton and choose floaty and covered up over skimpy and tight. We do our chores before 9am at the latest and for a couple of the hottest weeks other than hourly dips in the pool we’ll spend a lot of time inside and emerge at sunset like troglodytes.

Fortunately I have a stone house, and the downstairs is basically underground and so it’s a good ten degrees cooler than the outside and stays comfortable with just a ceiling fan. The tiled floors are cool too and an insulated roof stops the place heating up like an oven like a standard Turkish house. 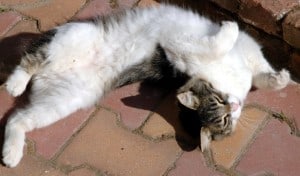 Whilst the dogs stay in the shade, littering the living room floor with their breath condensing on the cool tiles, Evils the cat loves The Heat, but then cats are solar powered and Evils requires a good ten hours a day of basking to keep his batteries topped up. By day he stretches and rolls languorously in direct sunlight in the courtyard on paving stones too hot to walk on in bare feet and at night he adventures far and wide across the village, sussing out the competition and making hostile takeover bids on the territory of less arrogant felines.

Its lunchtime now and The Heat owns the village, the sky is a bleached out faded blue, white around the edges, even the constant trill of the crickets has ceased and the house sparrows have taken to their nests deep in the cool shade of the walls. If I step outside The Heat settles over me, rippling down over my shoulders like a thick cloak and rising up through the soles of my feet from the griddle heat of the paving. Turkey might not do siestas but I do and so after lunch I’m taking to my bed, and I’ll drowse through the height of The Heat and wake up for the sunset, they’ve been amazing lately.