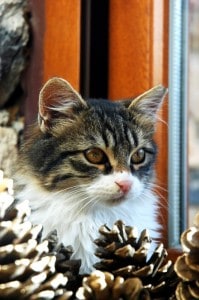 First there was Shadow, then there was Vinnie and then Evils arrived. Evils was my Christmas Kitten, he arrived on Boxing Day all big eyes and baby fluff with the sweetest, cutest, most adorable long lashed expression on his little face. He looked like the sort of kitten that gave Garfield nightmares. He was small enough to sit on the palm of my hand and he did, perkily upright, bright white bib smartly groomed and pale pink nose twitching. He was utterly beautiful. I loved his soft fur and his fat little baby tummy and his plump little paws. As you might have guessed, I have a very soft spot for cats. I love dogs, and I am used to them, but cats make me go gooey.

We called him Kimi after my much loved and long mourned Maine Coon cat which Phil had bought me years ago back in Wales. I had adored Kimi, with her tufted lynx ears and bright chirping call she would run to greet me when I came home from work and she was loyal and loving as most Maine Coons are as they tend to bond to only one person.

So Kimi the kitten moved in and very shortly we realised that he bore as much of a resemblance to my beloved Kimi as Hilter did to Mother Teresa. He was a holy terror. He wasn’t destructive, but he was arrogant and imperious, fearless and cunning, brutal and revenge driven and he was, in short, a howling psychopath.

Within four hours of his arrival his name was changed forever from Kimi to Mr Evils as he casually clawed Nick’s arm to bone when Nick carelessly stopped stroking him. If Mr Evils wanted something he got it by demanding it with menaces. He yowled his head off when he wanted feeding, stamping around the place and sneering at the staff until a bowl of chicken livers was provided and he was lifted up to snack on it. He locked eyes with Shadow when she tried to intimidate him until she slunk off in shame, the well known cat terroriser cowed by a few ounces of fluff with claws.

Used to the well bred behaviour of a pedigree maine coon who never did anything more evil than try and pounce on a butterfly I wasn’t prepared for Evils’ displays of gruesome cattiness; the disembowelled rats he would artfully strew around the courtyard, the baby ducklings weakly flapping on the kitchen door mat whilst he gnawed cheerfully on their wings; we even once caught him juggling Jack the baby tortoise from the garden, bouncing him on the stone paving of the courtyard, I think he was sniggering at the time.

He was, and is, truly evil. One winter’s night when a particularly dramatic storm was going for gold above the valley and the rain thundered down and the lightening was flashing lilac edged I went downstairs to check everything was all right. The power was off and I groped my way to the French windows to look out on the courtyard in the next lightening flash to make sure the pool wasn’t overflowing.

I shivered in the winter chill and peered out into the darkness. The lightening flashed, sheet lightening, highlighting the courtyard with an eerie violet shadowed flood of light; and there was Evils in the lightening flash, fur plastered to his frame by the torrential rain, sitting upright on his back legs in the middle of the courtyard, a rat twisting frantically in the grasp of his forepaws as he gleefully chewed at its head. That sort of tableau tends to stay with you!

Despite having a territory that cover most of the top half of the village and which is negotiated from roof top to rooftop Evils remains almost domesticated. He is willing to be domesticated more in winter than in summer. Summer he can be found patrolling the night for all things frail and vulnerable but in winter he is normally to be found hogging the soba and ruthlessly kicking Shadow out of her basket when he wants something soft to lie on.

In return for letting us feed him he sometimes brings little gifts home. The other week he brought a large rat into the kitchen, proudly spat it out on the door mat and gave me a look that said “Don’t say I never bring you anything bitch, now where are my chicken livers?”

I yelled for Nick to bring a plastic bag, we had another dead rat situation, and then the rat woke up and made a dash for safety under the kitchen sink. Evils ignored it and continued to casually groom the bloodstains off his fur. Half an hour of poking with a broom didn’t budge the rat which was sitting on the drainage pipe wishing it was a character in a James Herbert horror story instead of a badly mauled character in an idyllic tale of Turkey.

We emptied all the cleaning stuff out of the cupboard (we have a lot!) and I rammed Evils in to finish the job. He wasn’t amused by this. He protested, loudly, claiming his work was done for the day. When I let him out the rat was still in situ and Evils just wanted his dinner.

A further half hour with a broom and the rat was dislodged and staggered out into the courtyard past a laconic Evils who was clearly bored and felt this seriously bedraggled rat wasn’t up to his usual standard of prey, he prefers them feisty.

Once out in the courtyard the rat went into its death throes behind the woodpile and someone had to end its suffering. It wasn’t Evils, and it wasn’t Nick who can’t even vacuum up a spider, it was me who heaped more sin on her soul by despatching the nearly dead rat whilst Nick rung his hands and Evils enjoyed his lunch. 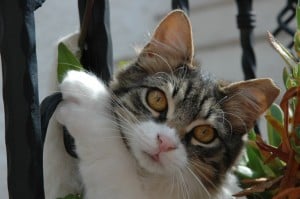 Do not be fooled by my cuteness!

You look at your cat, upside down on the rug in front of the fire or snoozing in the sun, his low toned purring lulling and his ears and nose twitching in deep and dreamy sleep and you wonder what he dreams of. Does he dream of chocolate boxes to pose on and bright flowers to bat with his paws and melting looks of sweet innocence to bestow upon his doting owners? Then you realise that this is a killer in a well tailored fur coat. And his dreams are of torture and maiming and midnight flights across moonlit roofs and sudden springs from the shadows onto anything with small crunchy bones. In reality we should turf the nasty creatures out onto the streets, but when they roll over and stretch with such feline grace we can’t because maybe they are more beautiful than us, and more elegant than us and we admire their spirit and so they stay.

Like Phil used to say – Feed a dog and it thinks you’re God, feed a cat and it knows its God!