When guests come to stay we have to explain about our adopted dog Vinnie, otherwise they’d be straight on the phone to the nearest animal welfare group who would be compelled to launch affronted Facebook pages against me for the state of this wretched animal.

Vinnie appears to be practically dead. He is a dog that has given a sterling performance of being on his last legs for the last three years and yet still manages, on sight of a rival, to connect with his inner wolf and summon the primeval beast from within and attack anything. He is, in short, a vicious little bastard, and whilst he spends his whole day sleeping, curled in a circle like a small ginger dragon in various spots around the house, when summoned to go for a walk he will drag himself forward, limping on all four legs and “talk” the whole way in a whining, high pitched oscillated voice that is a mixture of dog and outraged teenager.

Vinnie doesn’t walk, he sort of falls forward, big heavy head drooping downwards, plumy tail slowly oscillating, skinny all bone bow legs stumbling. He pisses on everything, he must, internally, be mainly bladder, and he wrings drops from his inappropriately large and furry dick at every marking spot on a walk, establishing his territory with the doggy version of a threatening bank of ICB’s.

He is feared by pretty much every other dog in the village, not that he could actually hurt them, but he could crush their dignity with one of his staggering, yelping, pop eyed attacks.

Vinnie came to us by accident. Shadow, our Labrador, came into season before we could get her to the vet to have her gearbox out and being pretty and poised and elegant every dog in the village wanted a piece of that piece of tail and we had the whole population camped outside the house with the canine equivalent of a bunch of petrol station flowers and a box of Milk Tray in their hopeful paws. And then Vinnie turned up and embarrassed them all away with his wildly flailing attack mode. Shadow initially turned her sweet nose up at him and so he moved in under the car to continue his suite with a stubborn patience and eventually she accepted him and he went on walks with Nick. He never got to shag her though – ginger Labrador puppies are just an affront to nature.

One morning, Vinnie (now with a name other than “that ginger scruffbag”, because Nick has to name everything) dragged himself from under the car and proceeded to go into his “I’m about to die in agony” routine which involved rolling on the ground crying loudly interspersed with lying there with begging blood shot eyes whilst raising a palsied paw in a mute appeal for assistance. Giving the hideous creature a quick once over I discovered he had an abscessed tooth but more than that he had a huge weeping burn on his tail. Clearly he had crawled under the car just after he returned home and had managed to stick his tail to the hot exhaust. It was a mess and so we had to go for the vet approach.

Wrapped in a blanket and screaming his head off and with a new collar buried in the bedraggled fur of his neck we drove off to Selcuk to subject him to the forthright ministrations of our very down to earth vet. I drove, Nick was in the back clutching Vinnie to his chest and worrying that it might all be over for the foul smelling animal.

Our vet is a tiny slip of a girl, she weighs about half as much as some of the dogs she routinely man handles. In my book she is a great vet, she isn’t sentimental, she gets on with the job and gets stuck in and she has a common sense approach. She is a proper vet; she has her own cow lift. I don’t like vets that prat around tarting up their surgeries with doggy play centres and make it look like a crèche, I want a vet that does the job and she does. She took one look at Vinnie who glared at her whilst gnashing his remaining teeth in an ineffectual way and stuck him in the bum with a huge dose of sedative. Vinnie collapsed spread eagled on the surgery floor, Nick was on the verge of tears and I helped the vet drag him into the operating room.

She shaved his tail down to stubble to take a look at the burn which was about three inches long, red raw and obviously painful but not infected. She jabbed him with antibiotics, cleaned the burn and dressed it and then indicated that she could castrate him as he was here and out for the count. I told her to do the works as he was here and I thought his life might be less fraught if he wasn’t continually chasing every sweet smelling bitch that sashaying into his range.

Half a drain pipe was brought from the corner of the surgery and placed on the examining table and she and I lifted Vinnie into it, laying him on his back in the half pipe with his several foot of tongue hanging out of his mouth and his hind legs conveniently splayed.

“What’s she doing?” asked Nick, never quick on the uptake with these sort of things. Show him a motorbike or a computer and he can tell you every intimate detail of its innards but any medical issue and his knowledge goes past fuzzy to completely clueless.

“We’re going to castrate him”

“Not until he wakes up.”

Nick turned a bit green when the vet made the first incision. I assisted her and stayed at the head end checking Vinnie’s breathing was okay and he was still well under. He was.

Watching Vinnie’s groin being manhandled did nothing for Nick’s nerves so he wisely buggered off for a cigarette whilst she vet rummaged in Vinnie’s nether regions, popped out his testicles and flicked them into the waste paper bin beside the operating table with a well practised wrist action. I grinned at her and she grinned back, I don’t see an arranged marriage in her future!

With a bandaged bald tail, a throbbing groin and a huge plastic collar on there was no way Vinnie was going back under the car and so I grudgingly allowed him into the courtyard to recuperate. Shadow was horrified, this imitation coyote was now messing up her space and making the place look untidy, but she got used to him and as he takes three times as long to eat his food and has a tiny appetite her opportunities for more scoffing were greatly increased so she accepted him. 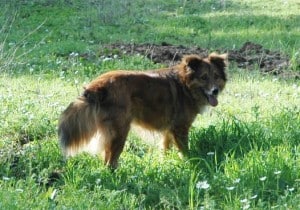 Vinnie never did make it outside again. Once they are in, they’re in and you become duty bound to give them a decent life for the duration. Vinnie didn’t look like he would live long and so I felt sorry for the poor little bugger and agreed that he could stay and we’d try and make what short time he had left as comfortable as possible. He had obviously had a tough life, he had old breaks badly healed, his rib cage was bent out of shape and his ears rested at 90 and 20 degrees on his skull. He looks like crap but it turns out he has the constitution of an ox and so he is still here, sleeping away the days, guarding the gate at night and generally being prepared to attack anything he thinks may upset me or Shadow.

He has no idea how to ask for affection, he just comes and leans against you if he wants a scratch. While Shadow sits urgently to attention and begs prettily with alternatively raised paws Vinnie just staggers over to you, trailing his permanent smell of old rug and leans against you.

He doesn’t know how to play. Whilst Shadow prances and rolls and juggles her toys in her incredibly dextrous paws Vinnie just lurks and looks at you with those sad bulging eyes.

He moans a lot. When you get the vacuum cleaner out and he has to move he staggers to his feet and makes his way haltingly outside, head swinging low, sometimes giving you a disgusted backward glance as if to say “I may only have moments left to live and you make me move!”. When it is bath time he tries to hide under the table but he secretly loves it and lies down in the soapy water and demands ten minutes of rubbing from the big towel when it is all over. Not that it makes any difference to his smell, the smell is clearly ground in bone deep and all a bath does is change its character from old rug to wet old rug.

He is hell to get any weight on because he isn’t interested in food. He eats slowly and pickily and is pandered to by Nick who fusses around boiling chicken carcasses for him and soaking his biscuits. Considering that Vinnie spent his whole life up to now as a street dog and probably stayed alive by licking road kill off the tarmac this seems a bit extreme but in true devoted owner fashion Nick can’t help it. Between the rich meat broth he eats every day and the imported from America glucosamine and cod liver oil tablets he is given every day this dog is better cared for than we are.

Vinnie is an eco dog, he seriously believes in conserving energy, so much so that he rarely moves. But when the temperature drops like it did this morning he wakes up, perks up and dances about the place in a pathetic display of doggy delight and at that point you have to love him, smell and all.