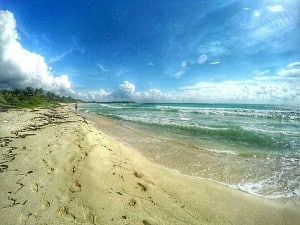 I took the sunlight for granted, which was pretty stupid. I spent a decade in countries drenched in sunshine but because I never went in search of the perfect tan and the only bits of me that weren’t Celtic pale were the bits not covered by a wetsuit I didn’t think the sunshine mattered. It was just an always there part of life. Then I moved back to Wales and the long winters and the gone in a blink of an eye days you get this far west began to make me not just unhappy but downright ill.

My doctor told me I need serotonin, serotonin from sunlight. My brain was used to it; those years of squint eyed gazing at blue horizons and the silver shimmer of the olive trees had changed me, my brain wanted the sun back and was telling me, very loudly. 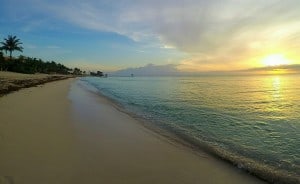 Now I try to regularly top up my serotonin levels as winter draws in and November is a great month to explore those areas of the world that have been hounded by hurricanes all summer. This November saw Nick and I exploring the Southern Yucatan, travelling a thousand kilometres through mangrove swamps and cenote riddled limestone lands. It was wonderful and the sun did me good.

This is the southern Yucatan, a land where the roads run out after running straight for hundreds of kilometres. Where the vanishing point you drive into can mesmerise you and the emptiness feels post-apocalyptic.

South of the Riviera Maya the jungle fights back, creeping over the plaster statues of the Virgin Mary in the roadside shrines. Butterflies dance in the verges, flitting between rampant vine and lighting blasted skeleton tree held up by its neighbours. Huge opal blue ones, with black edged wings like fluttering book pages, that you want to follow just so you can stay close to them and tiny vivid yellow ones, moving like fairies on acid.

As we head further south the jungle turns to sky mirroring mangrove wetlands that flood the low lying roads with the clear, tea coloured water of the swamps until we come to a shore of thick white sand bordered by coral rubble blocks from hurricane hammer blows.

Here we pause a while, staying in off grid eco lodges along the shore. The sunrises sing from the sea, the sunsets sizzle into the jungle and the dark whorls of rain squalls balloon above the endless green of the wetlands and the roads peter out to sand tracks and lonely ends.

We turn inland, heading towards the Belize border and we find lake town Bacalar and we explore it’s waters and fringes, creeping in wonder through a massive resort half build and then abandoned to the snakes and the crawling green, haunted and haunting.

Here are the highlights, the eerie sights and the impressions left by the long road and the strange shores.

The Yucatan is honeycombed limestone, friable and sharp, riddled with caves and sinkholes that were sacred to the ancient Maya who saw them as glimpses of the underworld. The cenotes appear with magic randomness, new ones come, old ones change as the Yucatan continues to evolve in the rinse of the rain and the lipping of the sea. There is a cenote that cave divers can follow all the way to the sea, riding the thermocline wave, following the oil in water mix of salt and fresh, all the way to Akumal bay. 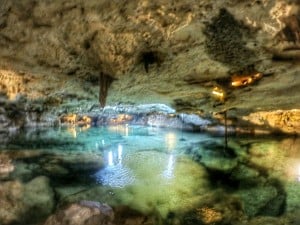 Beneath the flat scrubland and jungle the cenotes are other worldly, glass watered and silent. Spike stalactites glow with colour but I feel a sharp edge of fearfulness as the dark presses in and I sense the pressure of the sudden rainstorms above and I wonder how fast the water can rise.

In the silence underground I imagine the iron hard core at the heart of the Chicxulub impact crater, just west of us, lurking below the crust it barrelled into 65 million years ago, surrounded by a glittering halo of glass beads in rock. It is easy to let your imagination run away with you in the caves. The pastel shades of mineral in the rocks tease the eye, the strain of the swim through tiny spaces and the shadows thrown by rock forms play like Aluxo’ob, mayan sprites, in the light of Nick’s dive torch. It makes you think uncanny thoughts as the cool water laps at your face, soft licks. 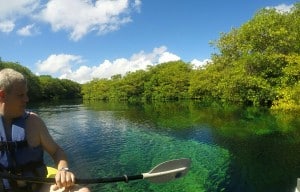 Below me, in the super clear water the yellow strands of the ropes the cave divers follow whisper fearfully of consequences should you let go of the life line – it would be dark and chill below the thermocline, with the slowing cascade of bubbles from an exhausted tank ticking life away in silver coin flurries. I am not a huge fan of caves, it seems, I prefer the wide open waters of the sea where I have room to turn and flee!

When the roofs of the cenotes collapse they form wriggling watercourses through the land, heavily edged with foliage, packed at the rims with twisted mangroves these are sunny sacred places, smiling at the sky. Exploring them is much more relaxing. By kayak we trawl the perimeter, looking for the slow clumsiness of manatees feeding on the weed and snorkelling to find clouds of fish in the nurseries that form in the safe haven of the mangrove roots.

The sun burns down, washing my brain with serotonin rain. My energy levels rise and my wanderlust wakes, stretches, demands new sights to see. We begin the driving, getting as far away as we can from civilisation, looking for old Mexico and road’s end. 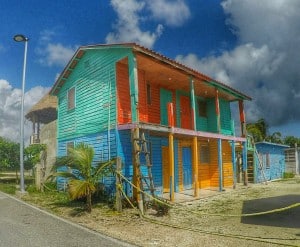 In Mahahual there is a blasted tree hung with single flip flops, faded by the sun, riders on strange tides that have eventually washed up here, tangled up in the sargassum weed, to find their end on an almost deserted shore.

Mahahual lingers and waits, almost comatose in the sun. It still exists because a remote cruise ship dock north of town brings a few boats a week. On those days it wakes early and all eyes are on the horizon as the cruisers hove into view. Beach cleaners lug weed in a sweat, vendors in a fever turn empty lots into packed trinket shops. The day visitors from the cruise ships ride their Segway’s along the pretty malacon and drive open top jeeps through the shallow edges of the mangroves on roads they churn away on their almost adventures. Massages on the beach, cycle rides and snorkel trips, there are a few hours of brief frenetic activity and then Mahahual goes back to sleep, shuts the doors, lays up waiting for the next ship to dock and while they wait the rain storms make the mangroves bleed raging red water into the sea and the jungle bides its time.

This feels like somewhere that hangs on, against the odds and some would say, against reason. If you ever wanted to run away then run here, nobody will find you. 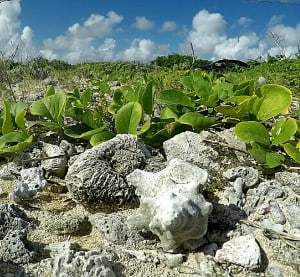 At the rag end of town I saw a semi-trailer parked up on a rough lot machete cut out of the jungle. It was missing the tractor unit. There was just the trailer, with a sagging black rectangle of an awning and a punch bag hanging on the edges. I wonder who lives there; some man who takes his anger at himself out on the punch bag whilst waiting for the pain of his past to be eroded away by the endless wind from the sea. I could write a book from that one image. 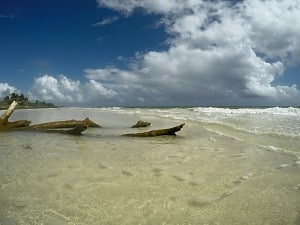 We drive up and down the coast from Mahahual, north as far as the edges of the Sian Ka’an Biosphere, protected and pure and south to Xcalak where the road runs out and the Belize border is a skimming stone away across the sea.

On a quiet stretch of coast we find Almaplena eco lodge and feel at home there, enjoying nights of starry skies and a beach to ourselves. Scoops of pelicans do low level fly past’s in formation whilst flings of sandpipers scavenge amongst the weed. I find glossy sea beans in the tangled weed and they feel lucky in my hand.

This is the Lake of Seven Colours, Laguna Bacalar, down near the Belize border, a sixty kilometre freshwater lake floored with gleaming white sand, shaded with deep dark cenotes and fringed with reeds. 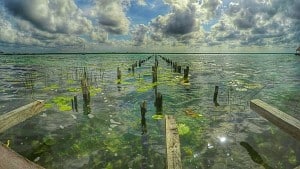 The backpackers have found Bacalar, they always find the best places first. They quietly fill up the hostels around this gigantic lake and bathe in the multi-coloured water and have bbq’s and epiphanies on its water lily edges.

The little town of Bacalar itself is sweet, quiet, typical Mexican with a zocala that hums with happy family life every evening and the scent of frying churros rises like sweet fog above playing children and strolling adults. It is wonderfully civilized. We adored it. 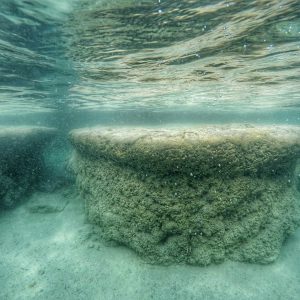 We swam in the vodka light water, scrubbed ourselves with the silver sulphur sands and explored the shifting channels that centuries ago led pirates in from the Caribbean Sea. One high cloud afternoon we snorkelled amongst the bulbous stromatolites that grow in the lake shallows. These ancient, almost lifeforms, trap sediment in mats and then gradually turn to stone, like sad grey green coral.

Bacalar is a place to return to, definitely, but I still want to go further south. 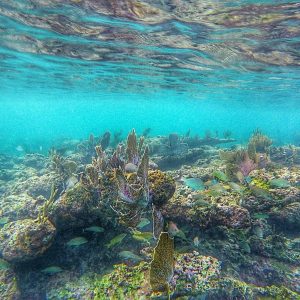 It takes a beautiful moment to bring me back to myself. We stopped at Akumal on the way to catch our flight home, staying the night well out of town in a small hotel on a quiet stretch of beach. That night the rains came, I saw the storm clouds building, a grey puree in the sky and I lay and listened to the mighty, land changing, rain fall. I got up at dawn. I went to photograph the last sunrise here and as I stepped onto the rain pitted beach, out of the corner of my eye, I saw the instantly recognisable flipper awkward flutter of a turtle hatchling struggling across the sand. 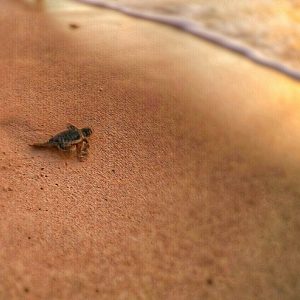 Soft of tread and wondering of eye Nick and I follow the hatchling across the beach whilst dagger billed frigates sulk on the palapas and the dawn sings a welcome. We watch over it until it reaches the lace edge of the waves. We watch it tumble in the wake, right itself, find its buoyancy, feel its flipper stroke. We watch the first breath it holds. We watch on and see the first time it breaches, twenty metres out, taking a breath of sunlight before it heads to the deeps for decades. It was a perfect moment.

“Will you marry me?” said Nick, and who am I to refuse such impeccable timing. 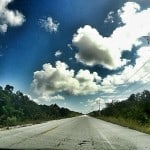 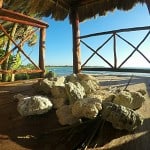 Old palapa at the shore 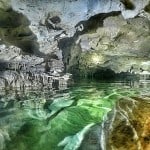 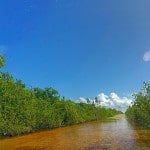 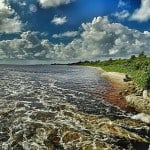 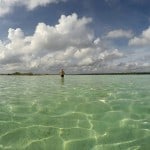 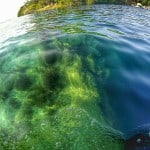 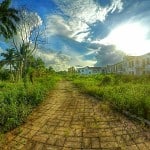 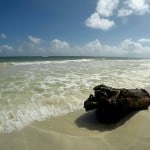 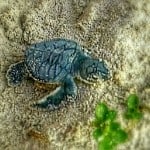 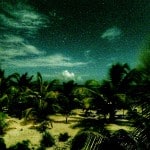 Eco Lodge on the beach

The roads we don’t travel – I regret the roads I didn’t take because I thought I had more time. When we lived in Turkey there was a weekly train service from Selcuk to Damascus. We talked about taking it. The names of the stations en-route conjured Silk Road dreams and stirred the old, almost memories that make them familiar from the dry recitations of holy books, Afyon, Karaman, Iskederum, and Damascus itself.

We should have gone. We didn’t find the time. We thought we had longer. But we didn’t and now I don’t know if that route will ever open again and I wish I had seen Damascus before these days came.

I must remember that.